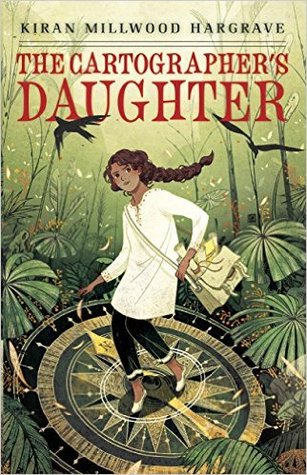 Title: The Cartographer’s Daughter (or, The Girl of Ink and Stars)

Forbidden to leave her island, Isabella Riosse dreams of the faraway lands her father once mapped.When her closest friend disappears into the island’s Forgotten Territories, she volunteers to guide the search. As a cartographer’s daughter, she’s equipped with elaborate ink maps and knowledge of the stars, and is eager to navigate the island’s forgotten heart.But the world beyond the walls is a monster-filled wasteland – and beneath the dry rivers and smoking mountains, a legendary fire demon is stirring from its sleep. Soon, following her map, her heart and an ancient myth, Isabella discovers the true end of her journey: to save the island itself.From this young debut author comes a beautifully written and lyrical story of friendship, discovery, myths and magic – perfect for fans of Philip Pullman, Frances Hardinge or Katherine Rundell.

My Thoughts
My rating:

(+0.5)
This is the first review where I’m writing the review before giving my rating, because I’m so confused about what to rate this book.

The Cartographer’s Daughter takes place on the island of Joya, which has a mythical past of being a floating island. There’s also this story, a myth that most of the people on the island know, about a girl named Arinta who fought a fire demon named Yote and saved the island. In The Cartographer’s Daughter, the myth of Arinta and the life of 13 year old Isabella intertwine when she joins a search party as cartographer to find her missing friend, who went looking for a mysterious murderer.

From the description, I expected an amazing magical-realism middle grade book, filled with myths and cuteness. A bit Alice in Wonderland-y, with special kind of birds and plants and such. What I got, however, was much darker. A book filled with monsters, and (sometimes) death. I think the fact that the book was 100% different from what I expected, is the main reason why I didn’t like it that much. Because besides this, it had some pretty great elements.

One of those great elements is the writing. Kiran Millwood Hargrave’s writing was beautiful and simple, yet elegant. The book had a very fairytale-esque feel to it, and her world building is fantastic, and definitely one of my favorite parts about the book. I am definitely going to read more of her work. However, I do think the story had a lot more potential, and I felt a bit disappointed when I finished reading it.

Another thing that I loved, was the friendship between Isabella and her best friend Lupe and their characters. They’re both very brave heroine’s that trust their instincts, and their friendship adds a beautiful tale of forgiveness, love and sacrifice to the story.

Overall, The Cartographer’s Daughter was a very enjoyable and magical read, but it just wasn’t as amazing as I thought it’d be.