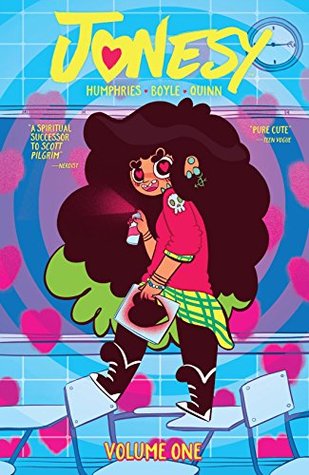 Jonesy is a self-described “cool dork” who spends her time making zines nobody reads, watching anime, and listening to riot grrrl bands and 1D simultaneously. But she has a secret nobody knows. She has the power to make people fall in love! Anyone. With anything. There’s only one catch—it doesn’t work on herself. She’s gonna have to find love the old-fashioned way, and in the meantime, figure out how to distract herself from the real emotions she inevitably has to face when her powers go wrong. Collects issues #1-4.

I wanted to love this one. The premise sounded amazing, and there is quite a bit of diversity (main character is Latinx, one of the female main characters has a crush on another girl), but I ended up feeling very disappointed.

For one, I really didn’t like the main character. I feel like they wanted to make her that kind of goodhearted rebel character everyone loves, but they tried too hard and ended up with a pretty selfish and unlikeable character.

I also felt like the plot wasn’t executed very well. There wasn’t one overall plotline, beside these ‘powers’ our main character has, so there wasn’t anything that made me want to keep on reading. It just felt a little all-over-the-place, really.

The only things I liked about this one were Jonesy’s dad, who is adorable and makes a lot of terribly good dad jokes and has his own donut restaurant, and the side character who has a crush on her lab partner, which was incredibly cute. However, there things were both not cute or interesting enough that it made me want to continue the series.

The art was very fun, though. It was very colorful and happy, and it went very well with the story!

I’m sure there are people who would like this graphic novel, but I, sadly, am not one of those people. I do encourage you to check it out for yourself, especially if you like donuts 😉