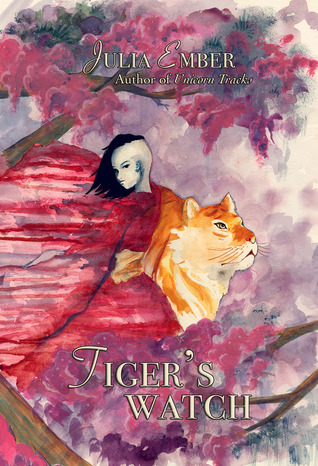 Sixteen-year-old Tashi has spent their life training as a inhabitor, a soldier who spies and kills using a bonded animal. When the capital falls after a brutal siege, Tashi flees to a remote monastery to hide. But the invading army turns the monastery into a hospital, and Tashi catches the eye of Xian, the regiment’s fearless young commander.

Tashi spies on Xian’s every move. In front of his men, Xian seems dangerous, even sadistic, but Tashi discovers a more vulnerable side of the enemy commander—a side that draws them to Xian.

When their spying unveils that everything they’ve been taught is a lie, Tashi faces an impossible choice: save their country or the boy they’re growing to love. Though Tashi grapples with their decision, their volatile bonded tiger doesn’t question her allegiances. Katala slaughters Xian’s soldiers, leading the enemy to hunt her. But an inhabitor’s bond to their animal is for life—if Katala dies, so will Tashi.

Y’all. This book. This book right here. It’s SO GOOD. I’m just… blown away. I don’t even really know what to say. It’s just SO SO GOOD.

Okay, let me try to be a bit more coherent.

After reading and loving Julia Ember’s The Seafarer’s Kiss just a few months ago, I naturally had high expectations for this one. However, a lot of books that I had high expectations for have been letting me down this year, so I was pleasantly surprised when I started reading this book and fell in love with it after just 2 chapters. And after just 4 chapters, I texted my friend that this might become one of my new favorite books. And when I turned the last pages, I knew that for sure.

The world in The Tiger’s Watch is incredibly beautifully crafted. It’s incredibly interesting, atmospheric, and very intricate without being info-dumpy. I also really enjoyed learning about the inhabitors, and Julia explains the entire ‘magic system’ in such a wonderful way that after just a few pages, you’ll feel like you’ve known about them all along.

Like I’ve probably already mentioned but want to stress another time, the writing in this book was AMAZING. It was quite simple and to the point, but so incredibly beautiful. It was incredibly addictive and, while I usually have a bit of trouble getting into a book, I was completely sucked into the story from page 2, which is incredible.

The plot was incredible as well. It kept me on the edge of my seat without making me feel too stressed out, and even though I had no idea where the story was going, it still had a few twists and turns that I wasn’t expecting at all.

So, overall, this book was INCREDIBLE. It had everything I wanted in a book, and I can’t wait to see where the story will go. And yes, I might have just looked up when the second book in the series will be published and I might have cried a little, but still. This book was incredible, and I feel like it’s going to make a lot of people’s favourites lists this year.

Also, in case my review hasn’t made this incredibly clear yet, Julia Ember is now definitely on my list of auto-buy authors and she should definitely be on yours too! You can pre-order The Tiger’s Watch through the links down below, and trust me, you won’t regret it.

You can also win a copy signed paperback of The Tiger’s Watch by entering the giveaway here!

Originally from Chicago, Julia Ember now resides in Edinburgh, Scotland. She spends her days working in the book trade and her nights writing teen fantasy novels. Her hobbies include riding horses, starting far too many craft projects, PokemonGo and looking after her city-based menagerie of pets with names from Harry Potter. Luna Lovegood and Sirius Black the cats currently run her life.

Julia is a polyamorous, bisexual writer. She regularly takes part in events for queer teens, including those organised by the Scottish Booktrust and LGBT Youth Scotland. A world traveler since childhood, she has now visited more than sixty countries. Her travels inspire the fantasy worlds she creates, though she populates them with magic and monsters.

Julia began her writing career at the age of nine, when her short story about two princesses and their horses won a contest in Touch magazine. In 2016, she published her first novel, Unicorn Tracks, which also focused on two girls and their equines, albeit those with horns. Her second novel, The Seafarer’s Kiss will be released by Interlude Press in May 2017. The book was heavily influenced by Julia’s postgraduate work in Medieval Literature at The University of St. Andrews. It is now responsible for her total obsession with beluga whales.

In August 2017, her third novel and the start of her first series, Tiger’s Watch, will come out with Harmony Ink Press. In writing Tiger’s Watch, Julia has taken her love of cats to a new level.