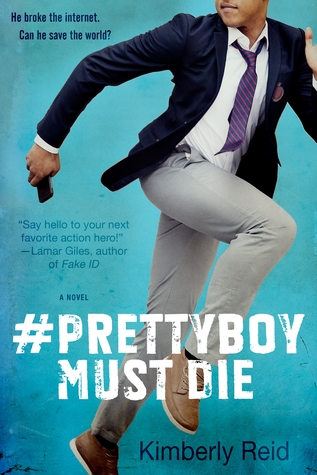 A CIA prodigy’s cover is blown when he accidentally becomes an internet sensation in #Prettyboy Must Die, inspired by the #Alexfromtarget story.

When Peter Smith’s classmate snaps a picture of him during a late night run at the track, Peter thinks he might be in trouble. When she posts that photo–along with the caption, “See the Pretty Boy Run,”–Peter knows he’s in trouble. But when hostiles drop through the ceiling of his 6th period Chem Class, Peter’s pretty sure his trouble just became a national emergency.

Because he’s not really Peter Smith. He’s Jake Morrow, former foster-kid turned CIA operative. After a massive screw-up on his first mission, he’s on a pity assignment, a dozen hit lists and now, social media, apparently. As #Prettboy, of all freaking things.

His cover’s blown, his school’s under siege, and if he screws up now, #Prettyboy will become #Deadboy faster than you can say, ‘fifteen minutes of fame.’ Trapped in a high school with rabid killers and rabid fans, he’ll need all his training and then some to save his job, his school and, oh yeah, his life.

Thank you to Tor Teen/MacMillan for sending an ARC of this book my way.

I had really high hopes for this book. Because of the pretty low ratings the book has gotten so far (I believe it has a 3.5 stars average on Goodreads?) I wasn’t expecting the book to be a masterpiece, but the synopsis sounded like a lot of fun, so I thought I was going to enjoy it. And after the disappointment that was The Love Interest, I was really hoping for a good spy novel. Unfortunately, I didn’t really like the book.

The book started off well. We immediately jumped into a bit of action, and we also got to know the main character, Peter, who is the type of character who is incredibly driven and does what he thinks is right, even if other people tell him not to, and even when it might get him into trouble. Which is usually exactly the type of character I like to read about.

The characters where this book’s strongest suit. I loved hem. The main character is incredibly intelligent and resourceful and it’s fun spending a bit of time in his head. He’s also a bit of a ‘typical teen guy’ without being the incredibly cliché teenage guy character, which I really appreciated.

The side characters were great too. We have Katie, the ‘sort of love interest’, who is incredibly badass and definitely doesn’t need your help taking down the bad guys. We also have Bunker, Peter’s friend, who’s the comedic relief. Interestingly enough, he also spend most of his life locked up in a bunker. (Which was interesting, until it was mentioned for the 20th time).

The book’s biggest downside is how incredibly messy it was. The writing felt very much all over the place, and I got very lost and confused at times. I just didn’t know what was going on anymore. And because it felt so messy, the story was nearly impossible to get into, which meant that while there were many thrilling edge-of-your-seat-moments, I never really felt myself reacting to any of it. I didn’t feel the excitement or the anxiety that you’re supposed to feel while reading scenes like that, and that was just incredibly disappointing.

And talking about the thrilling moments, the book started off good (like I mentioned before) but then the action sort of stopped, and the story only picked up again 35% into the book. Which was fine by me, I don’t mind waiting a bit, but once I got to the action-y parts again I just kind of thought “is that it?”.

Honestly, when I had read 75% of the book I just wanted it to end. Nothing really made sense to me anymore, and I kept getting the side characters (besides Peter, Bunker and Katie) mixed up. And when I finished the book, I felt like that gif of the guy trying to do math. I was incredibly confused.

So, overall there were quite a few elements of the book that I liked, but in the end, it left me feeling more confused than anything. The book had a lot of potential and just didn’t live up to it, which really disappointed me. This could’ve been so good.

4 gedachtes over “Review: #Prettyboy Must Die by Kimberly Reid”