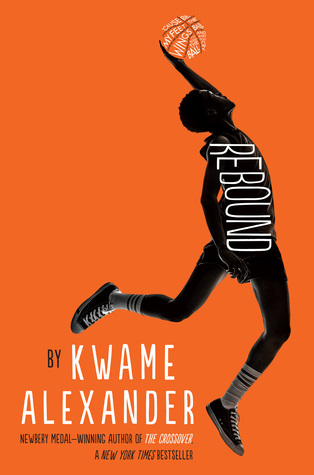 Before Josh and Jordan Bell were streaking up and down the court, their father was learning his own moves. In this prequel to Newbery Medal winner The Crossover, Chuck Bell takes center stage, as readers get a glimpse of his childhood and how he became the jazz music worshipping, basketball star his sons look up to.

If you’ve been reading my reviews, you’ll know that I’ve already read the two other books in this series (The Crossover and Booked) and absolutely loved them. I knew I was going to love this book too, but I was still scared going into it because it’s a prequel to The Crossover, so you already know how it’s going to end. I was scared that it’d be heartbreaking and it most definitely was, but in a good way. A really good way.

Rebound is about a boy named Chuck, who later turned into the father of Josh and Jordan from The Crossover. We followed him after the sudden loss of his father, and saw what he was like as a kid. We see him spending time with his family, learn about his friends (and future wife!!) and see him picking up basketball.

Once again, the writing was absolutely incredible. I listened to Rebound as an audiobook because the book is entirely written in verse and I feel like it’s so much more powerful when it’s read to me, and just, wow. It was such a powerful read and I cried multiple times.

Just like in the other two books, both the story and the characters were wonderful. I’m quite amazed by this series because, usually when I’m reading a series I can pick a clear favorite, but with this series I really can’t. They’re just all so consistently good.

I’m incredibly excited to pick up more Kwame Alexander books after this. I really want to pick up Solo next because it sounds great, and I’m curious to see what his books that are not apart of this series are like. I’m sure it’s going to be an incredible read as well.