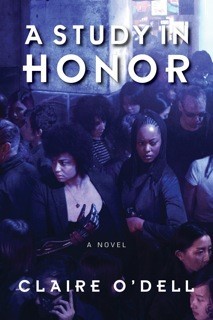 Dr. Janet Watson knows firsthand the horrifying cost of a divided nation. While treating broken soldiers on the battlefields of the New Civil War, a sniper’s bullet shattered her arm and ended her career. Honorably discharged and struggling with the semi-functional mechanical arm that replaced the limb she lost, she returns to the nation’s capital, a bleak, edgy city in the throes of a fraught presidential election. Homeless and jobless, Watson is uncertain of the future when she meets another black and queer woman, Sara Holmes, a mysterious yet playfully challenging covert agent who offers the doctor a place to stay.

Watson’s readjustment to civilian life is complicated by the infuriating antics of her strange new roommate. But the tensions between them dissolve when Watson discovers that soldiers from the New Civil War have begun dying one by one—and that the deaths may be the tip of something far more dangerous, involving the pharmaceutical industry and even the looming election. Joining forces, Watson and Holmes embark on a thrilling investigation to solve the mystery—and secure justice for these fallen soldiers.

Now, before we get into this review there’s something you should know about me: I am absolute trash for Sherlock Holmes retellings, in whatever shape or form. I really enjoyed the TV show Sherlock, I absolutely adored Elementary, A Study in Charlotte was so much fun, etc. If a book is described as a Sherlock Holmes retelling, I will want to read it.

Something you probably are aware of if you’ve looked at my blog for 5 seconds is that I’m also absolute trash for f/f books. Again, if you tell me a book is f/f and the synopsis even vaguely sounds like something I might enjoy, I will pick it up.

Now, add these two things together and you’ll understand why I was so incredibly excited about A Study in Honor by Claire O’Dell, which was described to me as an f/f Sherlock Holmes retelling. But was this everything I hoped it would be? Meh, not really.

This book was a lot darker than I thought it’d be, which was definitely not a bad thing. A Study in Honor is set in a futuristic America where things kept getting worse and worse ever since you-know-who got elected, and it even led to a new war called The New Civil War. Watson used to be a war surgeon until her arm was shattered and replaced by semi-functioning mechanical arm, which is why she isn’t able to do her job anymore. She ends up in Washington D.C. trying to get a replacement while working at a hospital, and ends up meeting Holmes, a secret agent who is looking for a roommate.

The politics in the book were definitely one of the things I liked most about it. It felt incredibly real and possible, which made it both absolutely terrifying and interesting. The book also deals with the after effects of war and talks about PTSD in a very open way, and shows Watson having flash-backs and panic attacks. This was incredibly hard to read, but something I definitely appreciated.

I really liked the characters. The relationship between Holmes and Watson can truly make or break a Sherlock Holmes retelling and, in this book, I’m not actually sure if I like their dynamics yet. I like Watson as a character, whom we got to see a lot more of since the book is written in her POV, but I feel like I haven’t seen enough of Holmes or their interaction to have a clear judgement on them yet. Which is a little strange considering  the book is 300+ pages long…

Also, the relationship between Holmes and Watson is what kind of disappointed me at first, considering this book was described to me as f/f so I was fully expecting a romance between them but… there wasn’t. There were definitely hints of potential there but no actual romance, which was a shame since I was really excited about a romance, but I feel like this series might be better suited for a very slow burn romance, which is why I have mixed feelings. Both disappointed, but also excited for the potential.

But a thing that definitely disappointed me was the fact that this book is described as a Sherlock Holmes retelling and there wasn’t any mystery until about 65% into the book. And the mystery was solved way too easily, in my opinion, and just didn’t leave me wanting to keep reading to find out more, like mysteries normally do. Of course I wanted them to solve it but the actual detective stuff was just… boring, to be completely honest with you. This book was definitely more of a set up to a series, spending more than half of the book explaining the world and Watson’s character, and the mystery took a bit of a backseat. I can completely understand why the author chose to do this, but as a reader it was a huge disappointment. I just hope this is done better in the future books.

Overall, this book and this series has a lot of potential and I really enjoyed the world and the characters, but since the mystery was such a huge disappointment I won’t be shoving this book in anyone’s faces saying “YOU HAVE TO READ THIS” any time soon. Maybe if the rest of the series proves to be better, but until then… we’ll see.

3 gedachtes over “Review: A Study in Honor by Claire O’Dell”