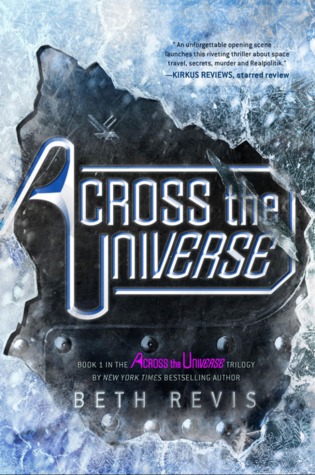 
‘A love out of time. A spaceship built of secrets and murder….
Seventeen-year-old Amy joins her parents as frozen cargo aboard the vast spaceship Godspeed and expects to awaken on a new planet, 300 years in the future. Never could she have known that her frozen slumber would come to an end 50 years too soon and that she would be thrust into the brave new world of a spaceship that lives by its own rules. Amy quickly realizes that her awakening was no mere computer malfunction. Someone – one of the few thousand inhabitants of the spaceship – tried to kill her. And if Amy doesn’t do something soon, her parents will be next. Now Amy must race to unlock Godspeed’s hidden secrets. But out of her list of murder suspects, there’s only one who matters: Elder, the future leader of the ship and the love she could never have seen coming.’

(3.75)
Across the Universe has been sitting on my shelves, unread, for quite some time. But once I started reading it, I was hooked and couldn’t put it down.

Amy is a seventeen year old girl, who has a great life. She has lovely friends, a cute boyfriend, a great family and big plans for the future. However, when her parents are chosen to go on a journey in a big space ship, to this new planet, her life completely turns around. Because her parents are very important to the ship, and to the new planet, Amy is allowed to come with them. But there is a catch: it’ll take them 300 years to reach this new planet, and they’ll be frozen that entire time. However, (surprise, surprise) not everything goes as planned. A person from the crew that takes care of the ship, is unfreezing these people in an effort to try and kill them, but there is one person who survives: Amy.

After being unfrozen, Amy and her new friend (and love-interest) Elder, who is the future leader of the ship, try to find an answer to why all of this is happening. While searching for these answers, they find out that the ship has a lot of dark secrets.

Across the Universe is a very addictive and fast read, and I couldn’t stop reading until all of my questions were answered (which took a long time but I was totally okay with it, because I was having a great time). I absolutely adored the setting, and the whole political side of the story was super interesting, and maybe even what I liked most about the book. Sadly, I didn’t really like the characters that much, and I certainly didn’t like the romance aspect of the book, since it all seemed very one-sided.

This book was the first Sci-Fi book I’ve ever read (TLC isn’t really Sci-Fi, right?) and I LOVED IT. I can’t wait to read more books set in space, and I’ll definitely be picking up the sequel sometime soon!